On The Scene at InvestIN’s Summer Experiences

We talk a lot about the fantastic experiences and immersive activities we offer on our summer career programmes. But what do these actually look like? We sent our in-house content writer for an exclusive sneak peek.

Summer is an exciting time at InvestIN.

July marks the arrival of our flagship summer experiences: 5, 10 or 15-day programmes offering a 360-degree view of the world’s most desirable careers.

This year, they were more jam packed than ever with immersive simulations, inspiring site visits and hands-on learning opportunities. To get a better understanding of what these were really like, we sent our in-house content writer to check out 1 of the most exciting days from 4 of our most popular programmes.

Our summer programmes offer the ultimate, in-depth experience of your dream career. Available in 15 different industries.

Students on The Young Lawyer Summer Experience begin arriving at The Supreme Court: the final court of appeal for civil and criminal cases in England, Wales and Northern Ireland.

There is a feeling of anticipation in the air as different groups are assigned to different courtrooms for the day’s events.

Rhys Rosser, one of the barristers leading the day’s sessions, plays a clip from Prime Minister's Questions and students are asked to move to one side of the room if they thought Boris Johnson was the better speaker or to the other for Keir Starmer. 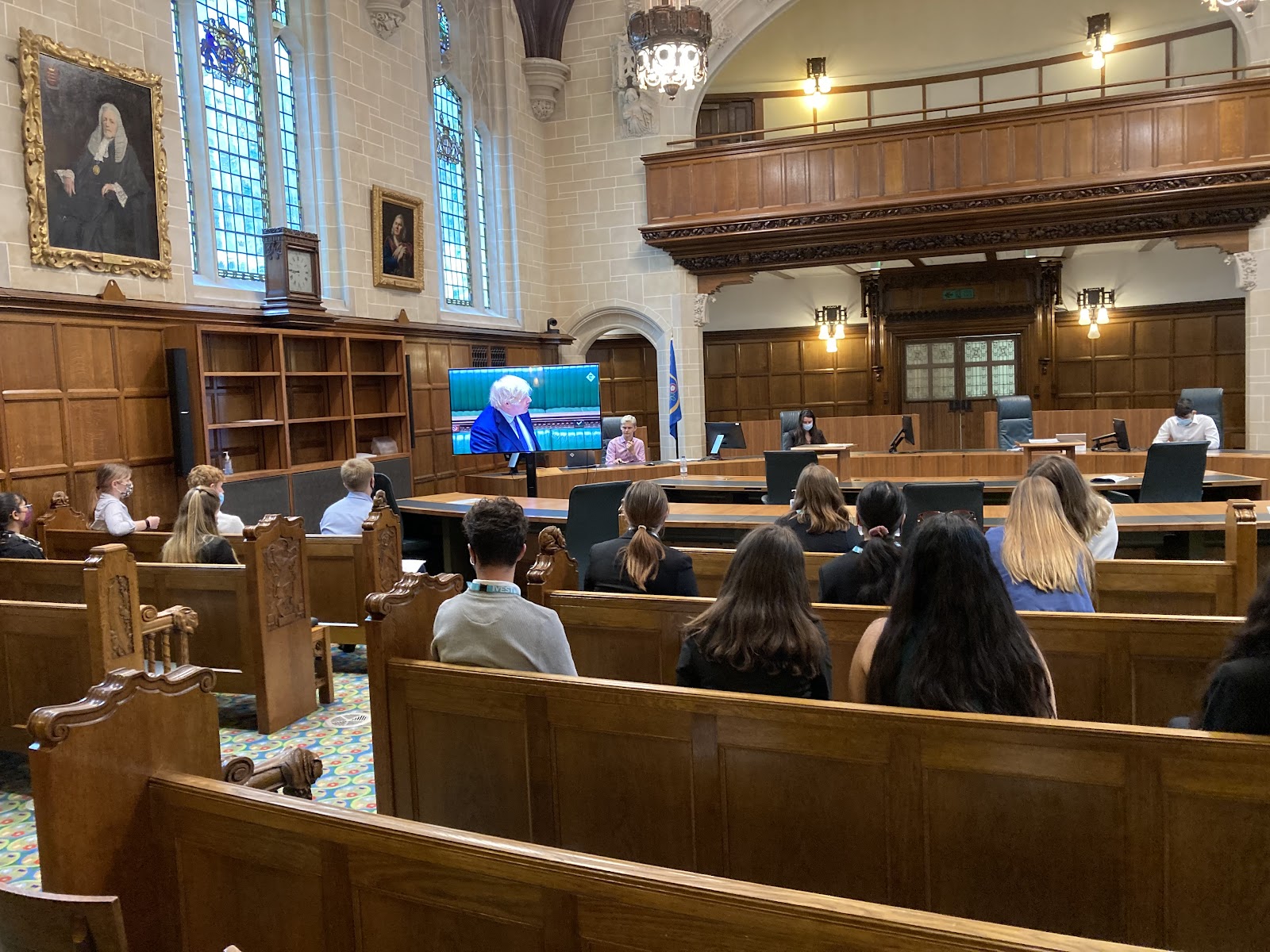 All but one of the students votes for Keir Starmer.

“Interesting,” says Rhys, turning to the student who voted for Boris. “What did Boris do to win your vote? And why do you think everyone else voted for Starmer?”

“Well, Keir Starmer was the one asking the questions, which is easier.”

A spirited discussion and analysis follows.

Later on in the day, the students are taught a little about enunciation: Rhys asks the students to stand at the front and read a tongue twister as clearly as possible, with increasingly difficult variations.

As students stumble over the words and phrases, the courtroom fills with laughter.

“Of course, these are fun, but they’re not just for entertainment,” says Rhys. “As a lawyer, you spend so much of the day talking to clients, addressing a room. When you first start speaking during the day, your voice isn’t warmed up, and it makes a massive difference. Doing exercises like this re-enforces how important it is to have good enunciation and intonation”.

Students are then asked to stand up and argue for or against major issues such as should the monarchy should be abolished and whether the use of torture when national security is concerned should be lawful, etc.

Rhys gives detailed feedback to each speaker, engaging the students in an examination of their peers: "what did you think of the pacing?", "hands up who think their styles were similar?".

In courtroom 1, students are working on a tricky case:

A former reality star with a large social media following has been posting gender critical opinions online. When her employer terminates her contract without explanation, she believes it is because of the views she’s been expressing. After appealing the decision at the Employment Tribunal, she appeals to The Supreme Court.

Students have now divided into groups: whilst some prepare to prosecute, others prepare her defence. 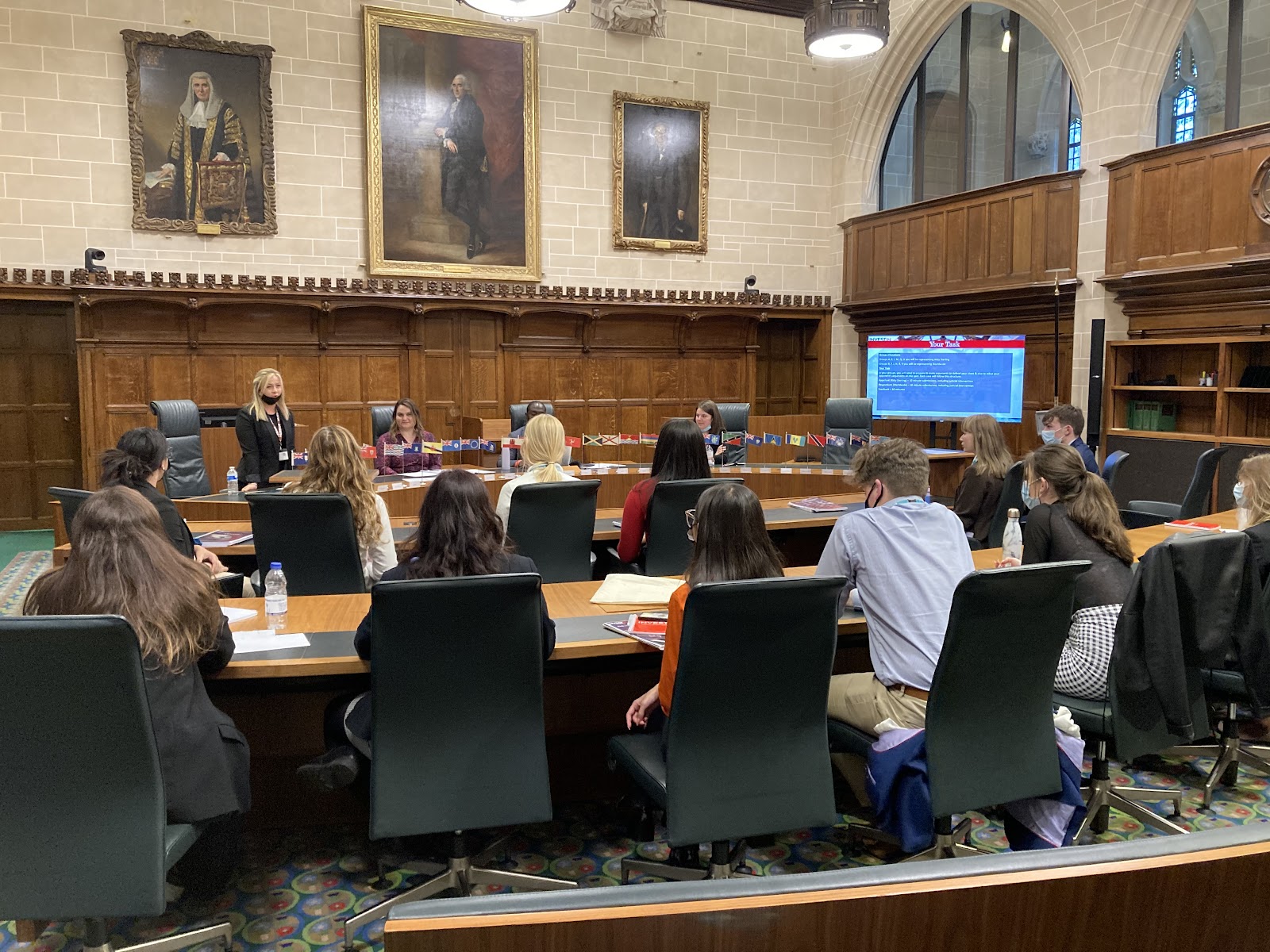 The defence now stands, giving an impassioned speech on behalf of their client.

The judge then doles out some tough questions…

Would you be up for the challenge?

Want to argue your case in The Supreme Court and represent your client in a live murder trial? Check out InvestIN’s Summer Experiences in Law.

Students have spent the past 2 days planning and writing a film scene using industry-standard screenwriting software.

They are now in one of the most exciting stages of the production process: directing and shooting their scenes using state-of-the-art camera equipment.

To do this they have come to Camberwell Studios, an independent film facility in South London with 2 separate studio spaces. As torrential rain hammers on the roof, students gather to bring their visions to life. 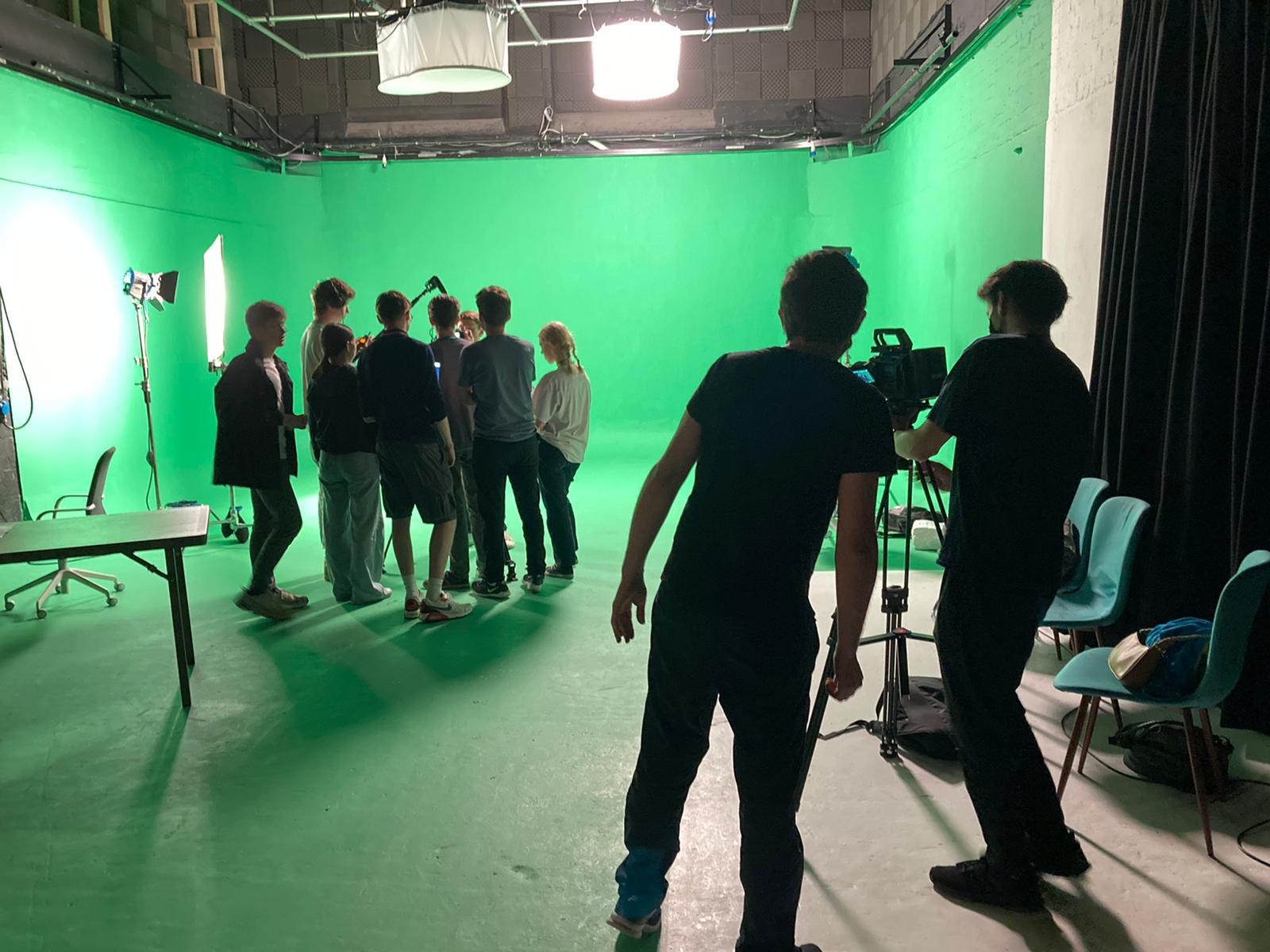 Two actors sit opposite each other at a long table. 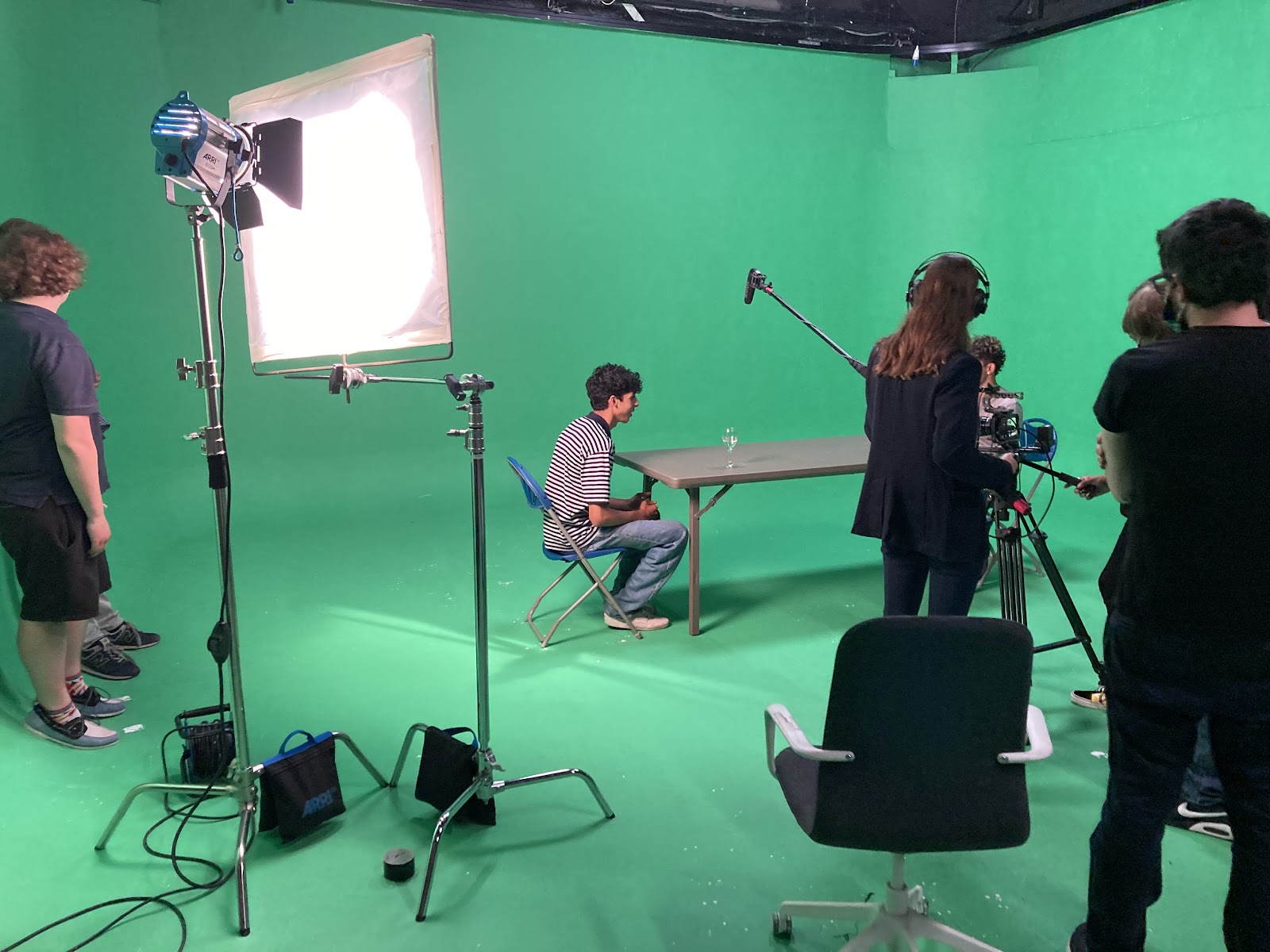 As the director yells ‘action’, their conversation quickly becomes heated.

“It’s all about betrayal,” says a watching student. “These 2 guys have known each other for about 6 months. One of them is dealing drugs to fund his younger sister’s tuition, the other is an undercover agent. As they’ve grown closer and the agent has come to understand why the other guy is doing what he’s doing, he starts to feel guilty about double crossing him. This scene is where the guy finds out and it all comes to a head.”

5 actors sit around a table in front of a green screen. It’s a boardroom and a meeting is in place.

Different shots and angles are being discussed. 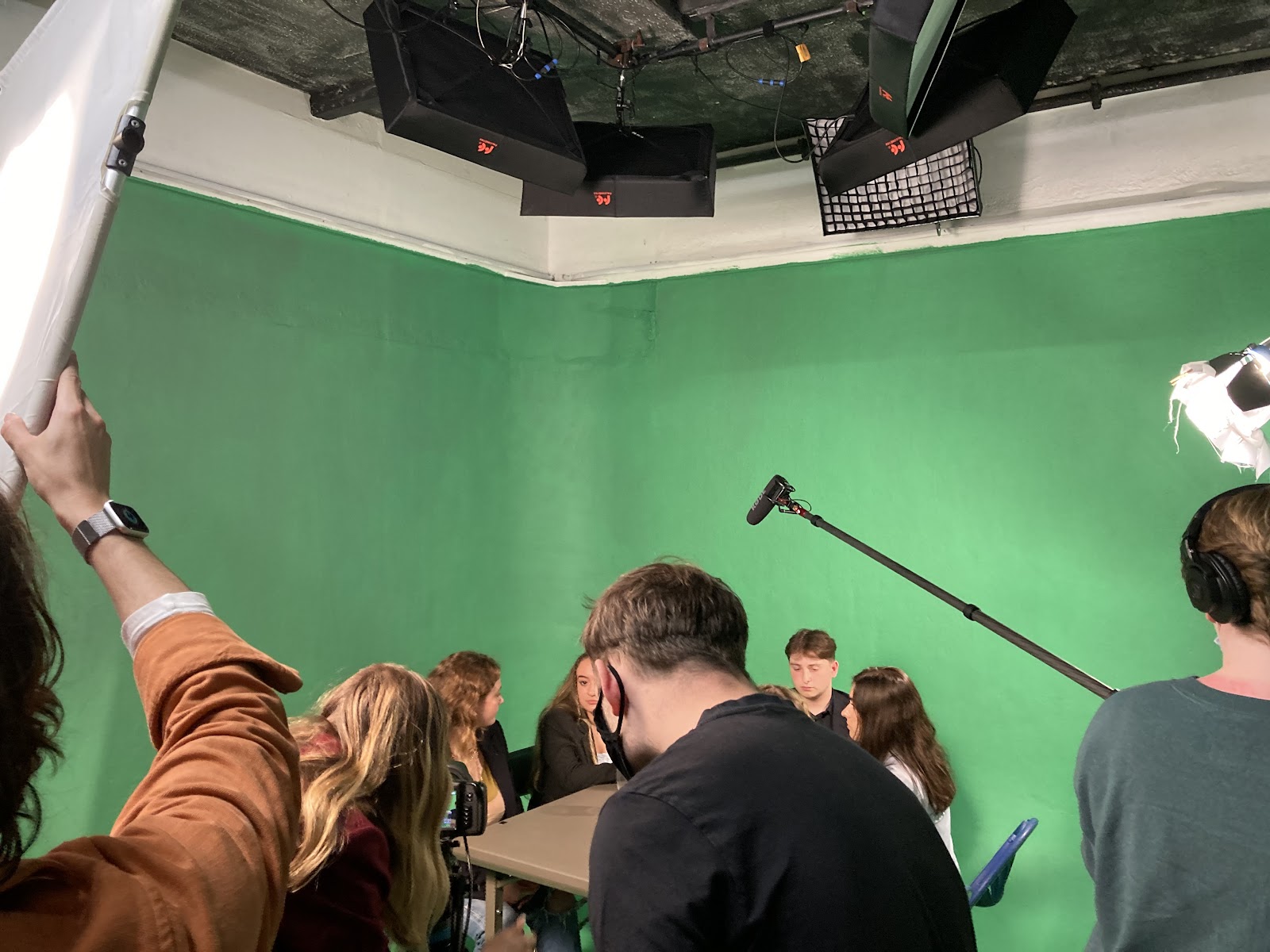 “Cameras rolling, sound rolling, are we ready for a take?”

The director shouts ‘action’ and the scene begins.

“If we market to social media -”

“It’s not about marketing, it’s about recruiting young professionals. We need to think about the future of this company.”

The people sat around the table turn to their boss.

“Yeah, I mean, last year our corporate strategies were brilliant. But the profits… they were the worst we’ve seen in over a decade.”

Students gather behind the camera as the scene unfolds.

“We’re sort of breaking the fourth wall,” says one in a hushed voice. “The guy at the head of the table is in a therapy session, and this is going on in his head. The therapist’s voice is going to come in from the outside.”

The scene reaches a dramatic conclusion and then, cut.

What scene would you create?

Want to write, direct, produce and edit your own film scene and get feedback from professional filmmakers? Check out our Summer Experiences in Filmmaking.

Students begin to congregate at the top of London’s iconic ‘cheesegrater' for a live trading simulation led by Piers Curran, Managing Director and Head of Trading at leading financial firm Amplify Trading. 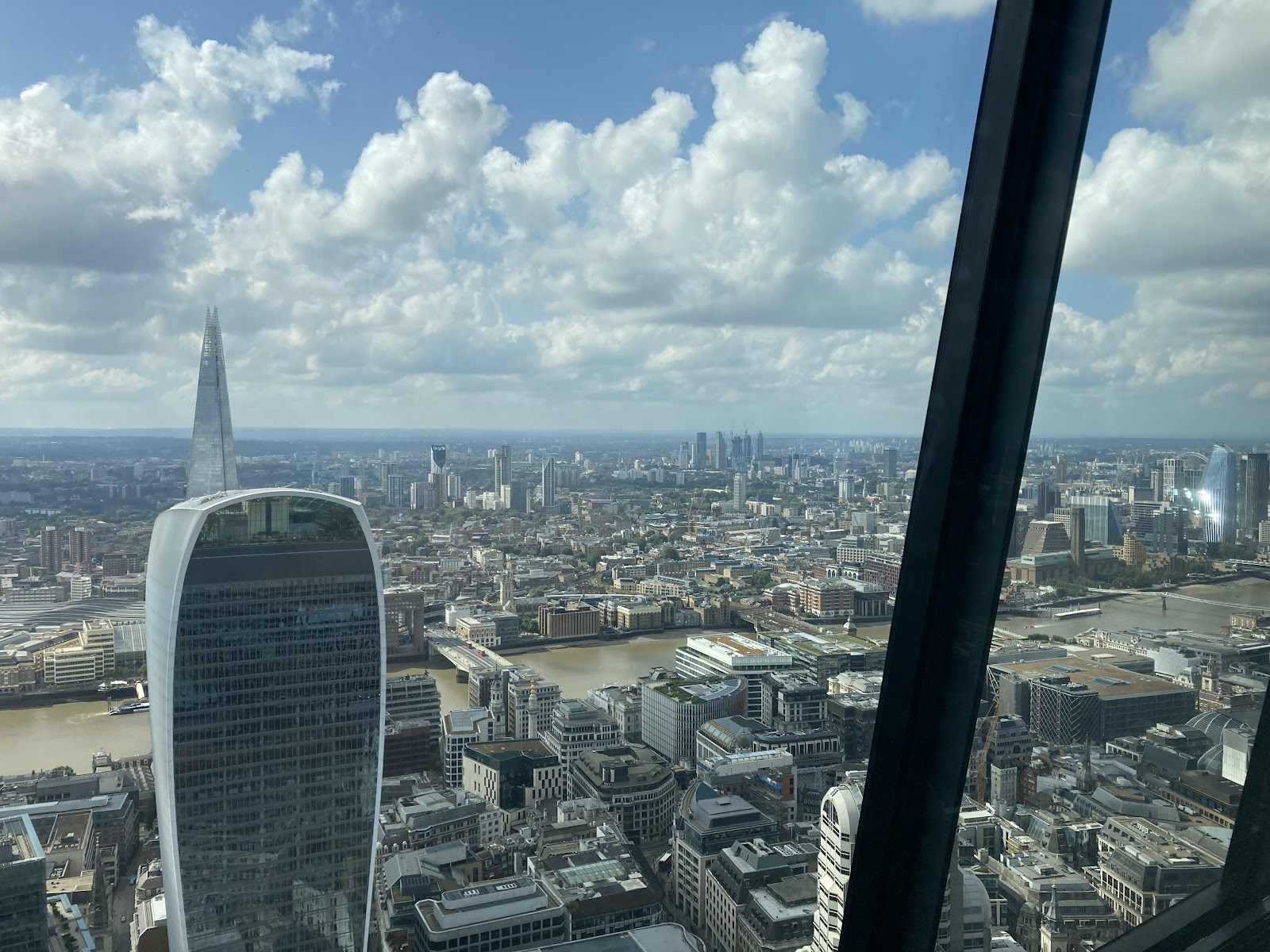 The morning begins with an introductory guide to trading by a top trader from Goldman Sachs. 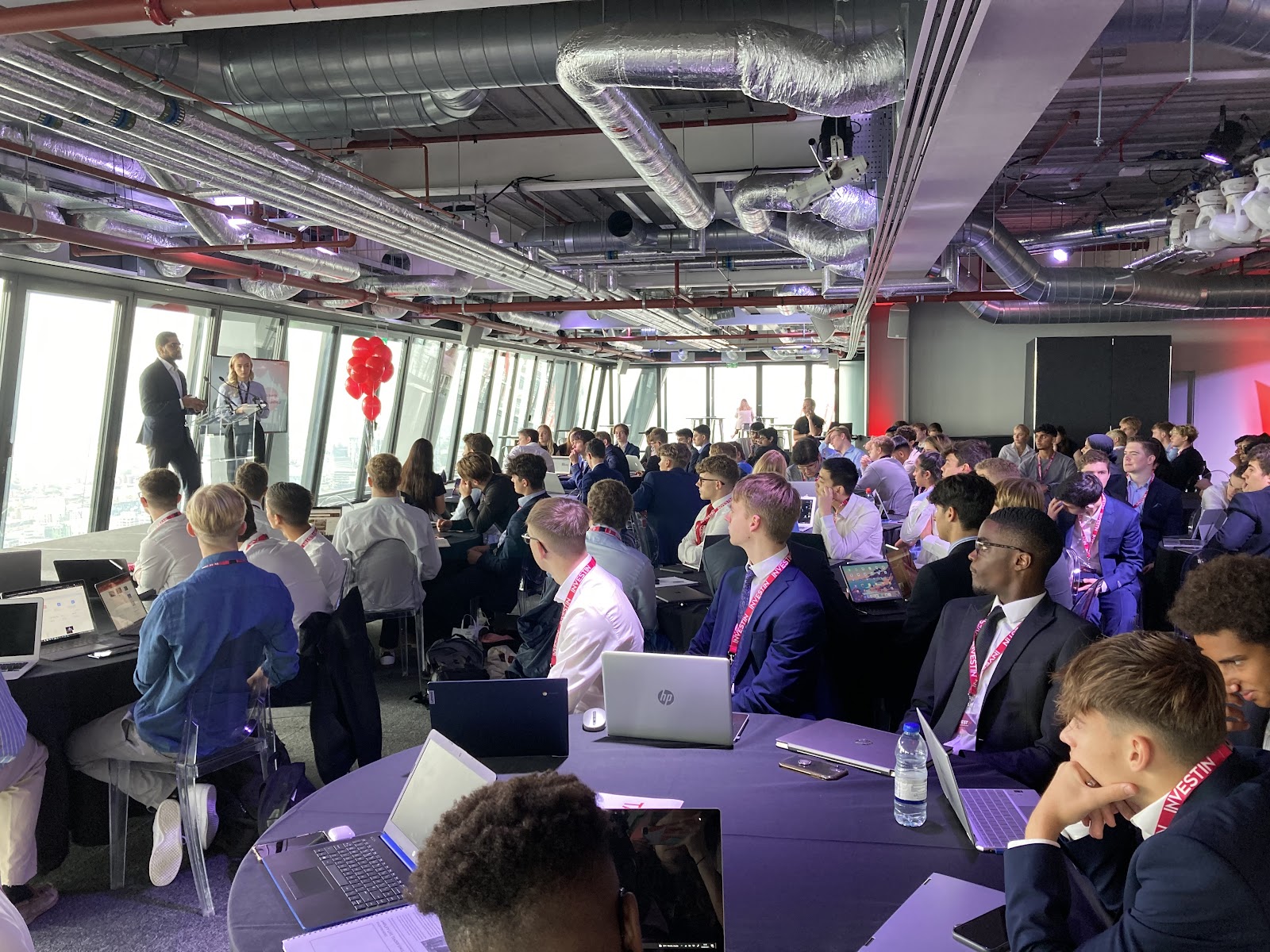 “This is a unique experience,” he says. “You really get a feel for what trading is like. Be honest with yourself at the end of the simulation. Ask yourself: when I was doing these trades, how did it make me feel? Excited? Uncomfortable? It’s an insightful exercise. Trading isn't for everyone.”

Then, the students dive in and begin trading live on the London stock market. 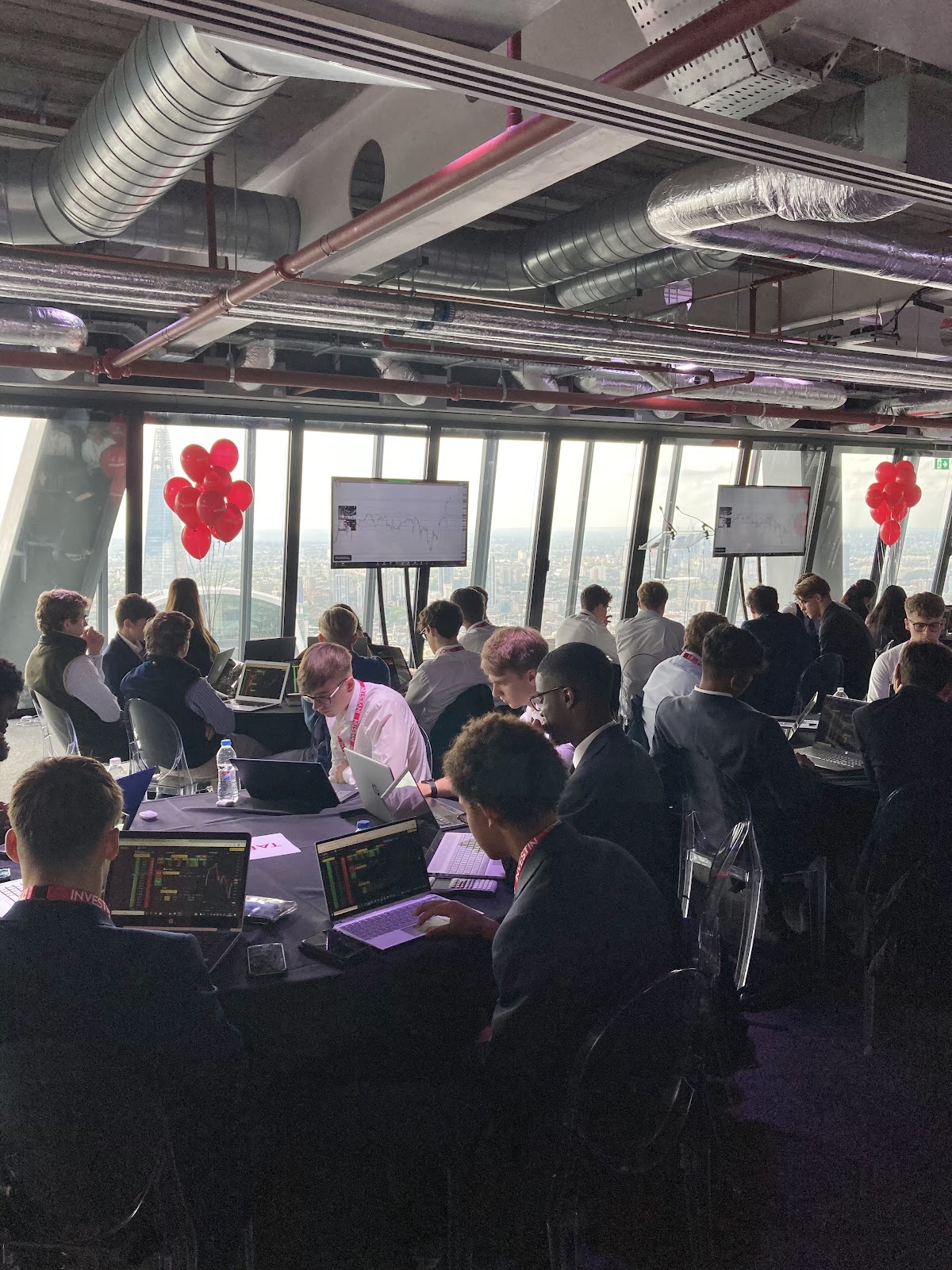 Piers walks among them, keeping everybody on their toes.

“Who’s keen on going long because they think the price is going to go up? Who thinks it’s going to go down and we’re going to short?” he asks. “This makes markets - we need people with different opinions.”

“You have to be super disciplined - you've got loss limits that you have to stay within across all markets. One breach and you’re disqualified.”

Students take the lift to Level39 of the legendary One Canada Square in Canary Wharf.

The views are spectacular. 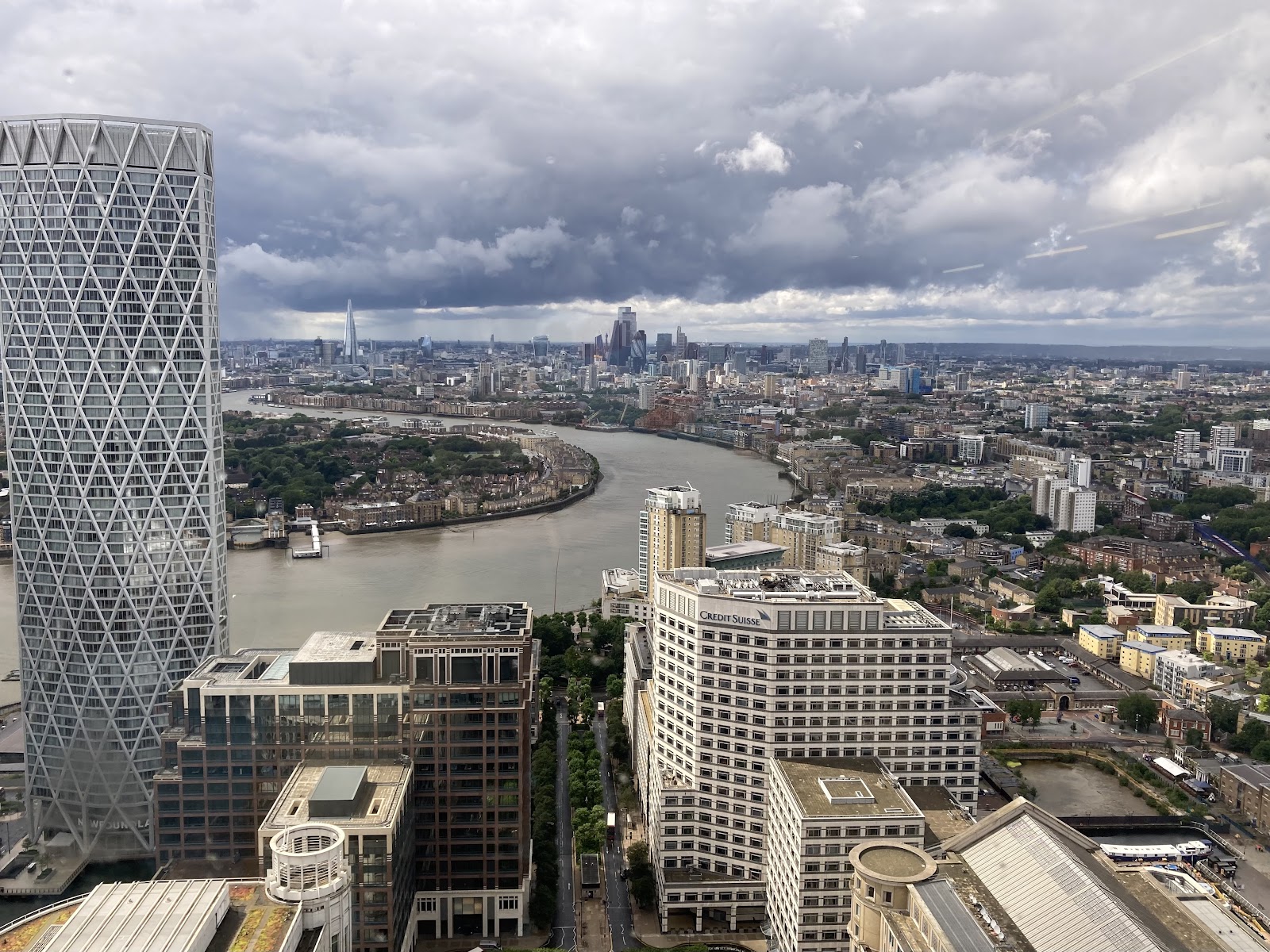 They are here to take part in a cutting edge ‘Fintech Forum’, where they will collaborate in multi-disciplinary teams with aspiring entrepreneurs and computer scientists.

Each group gets 4 hours to design and develop a project plan for a unique new trading app. The app must be ethical, educational and aimed at novices aged 18-30 with no prior knowledge of trading.

As the students get to work, there is a buzz of excitement in the air. 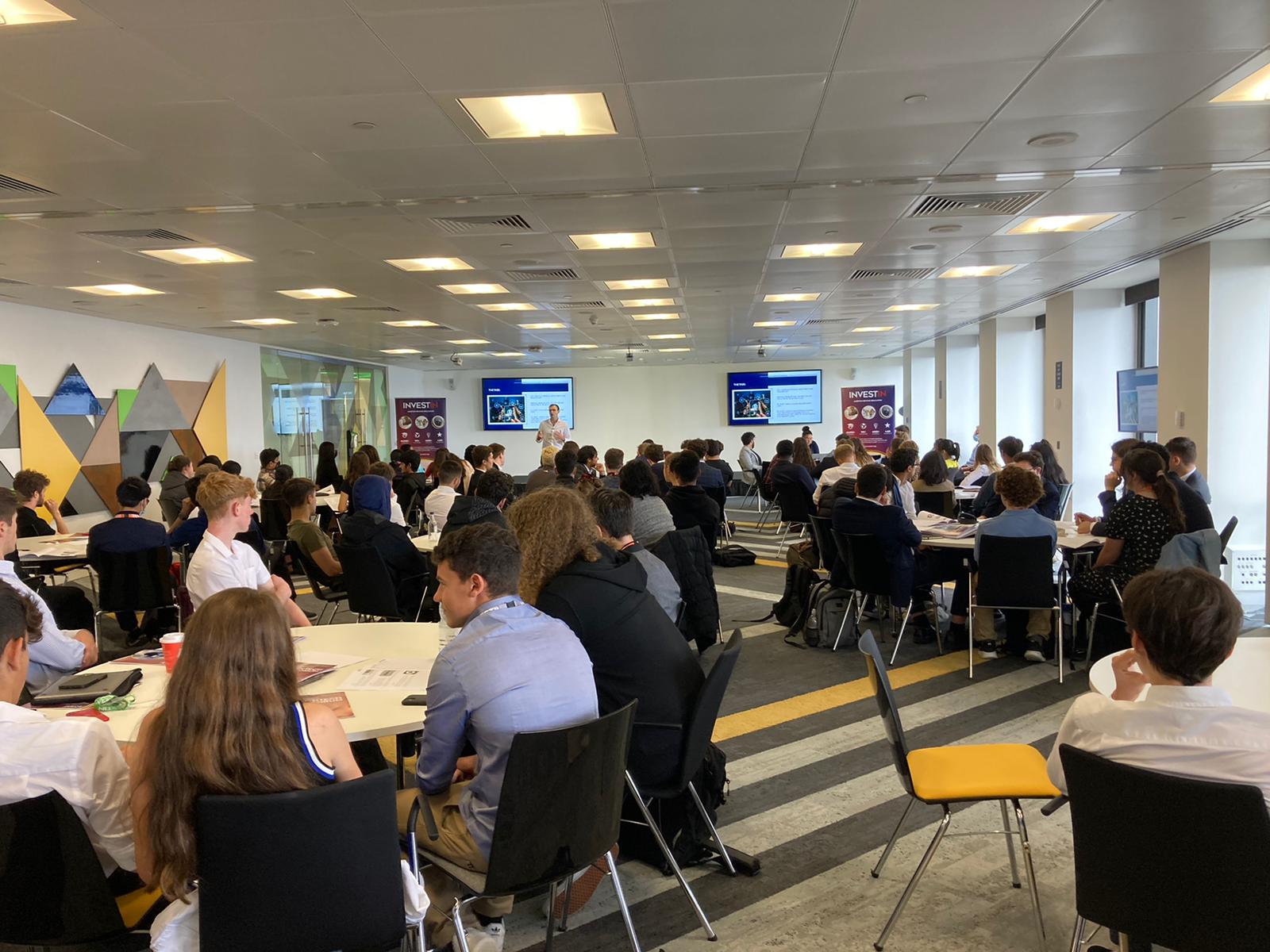 Throughout the afternoon, students book consultancy slots with industry experts to talk through their ideas.

By 4pm, time is up, and students gather to pitch their ideas to a panel of top professionals in an effort to secure that all-important financial backing.

Ideas are slick, smart and very creative. Apps that focus on user experience to make the investment process as seamless as possible particularly impress the experts.

What would you pitch?

Want to trade the stock market in an iconic London skyscraper, pitch your own Fintech app and experience a live mergers and acquisitions deal? Check out our Investment Banker Summer Experiences.

As overground trains rumble overhead, students are guided through paddocks and enclosures.

Dr Massie talks them through how the different farm animals are cared for and the kinds of diseases vets are often faced with in the different breeds.

At the pigsty, a lesson on artificial insemination, which, it turns out, is usually more pleasant for the female than the natural way! 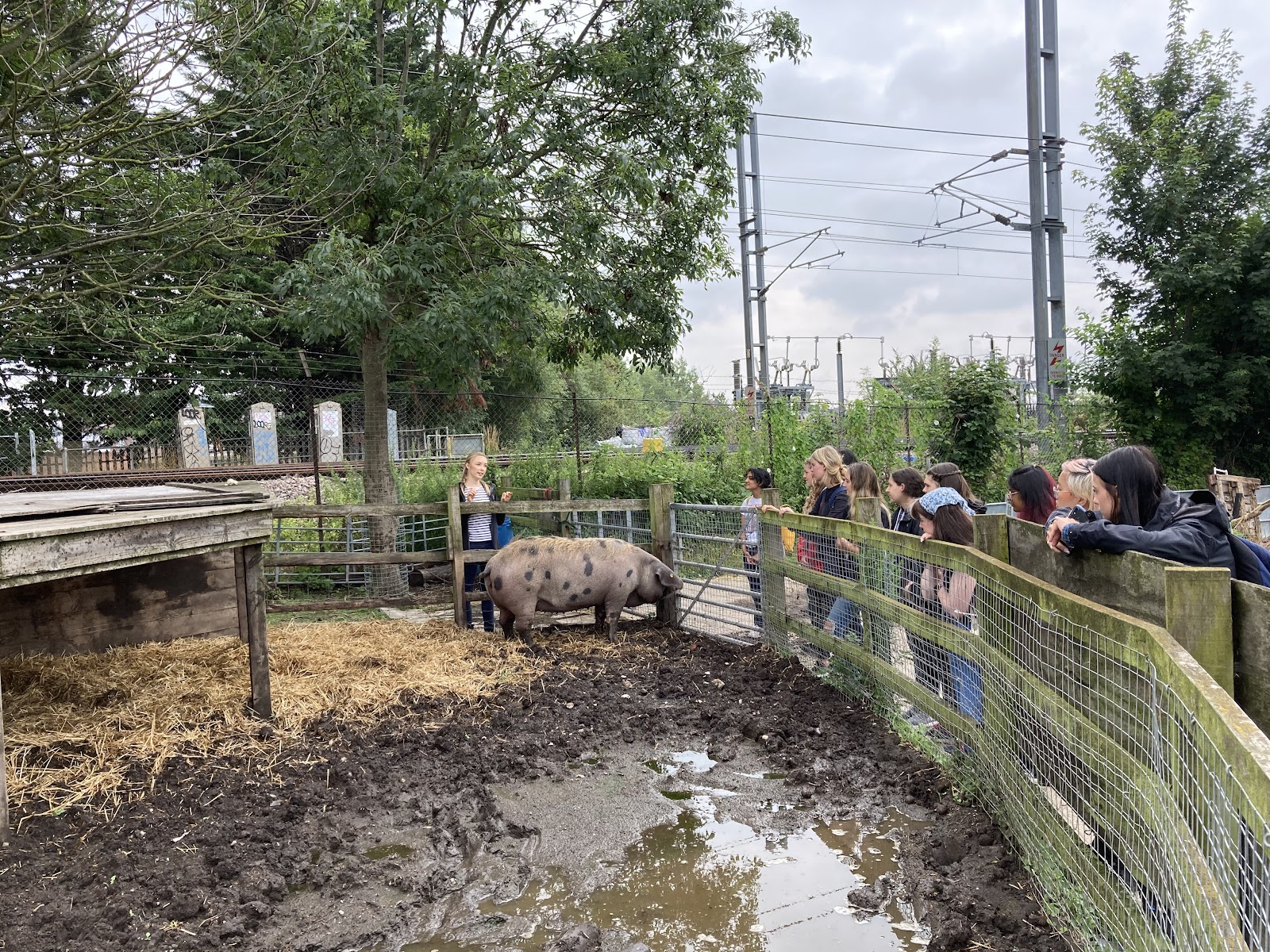 As she climbs into the paddock with Shirley the cow, Dr Massie explains the difference between beef and dairy cows. Some interesting questions follow, particularly from the several vegan students on the programme. 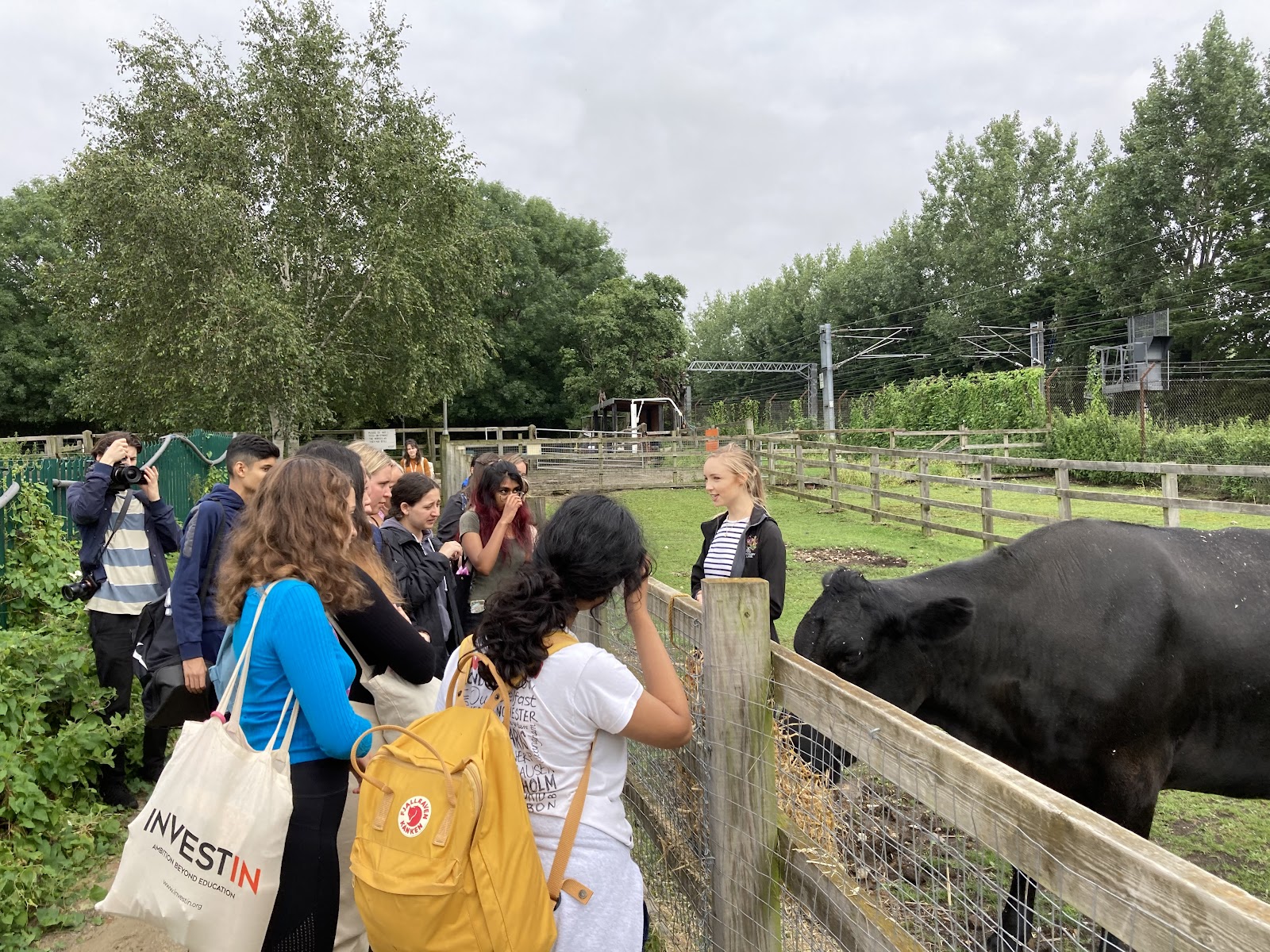 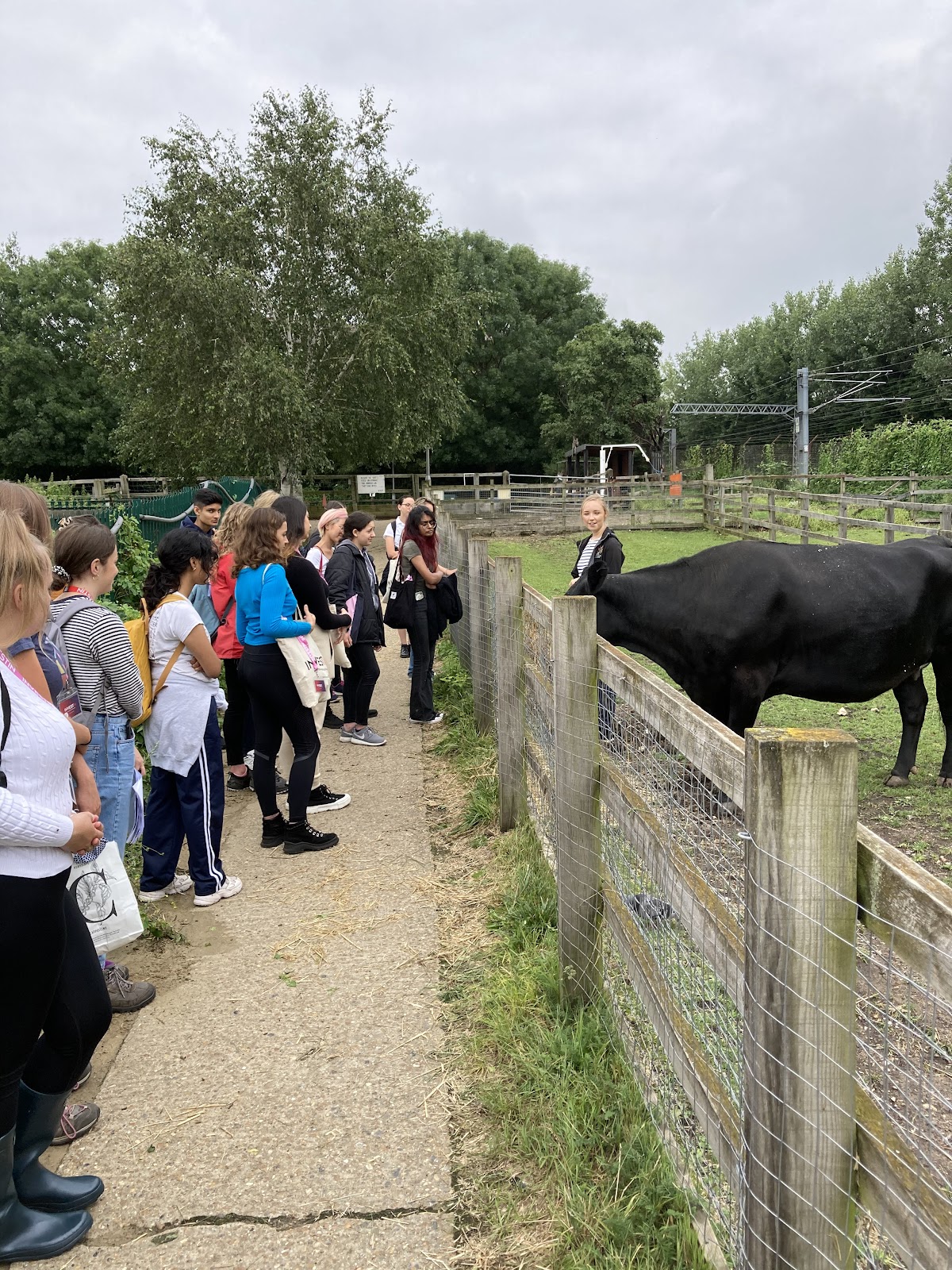 “Sometimes I play classical music to sheep to try and calm them down,” says Dr Massie. “I will often do it to try and stop them lambing in the night when everyone is sleeping.”

At the end of the tour, the students get a chance to examine some of the animals themselves.

Nora and Dora, the resident donkeys who came to Kentish Town from a donkey sanctuary 4 years before, are brought forward for Dr Massie to do a demonstration. 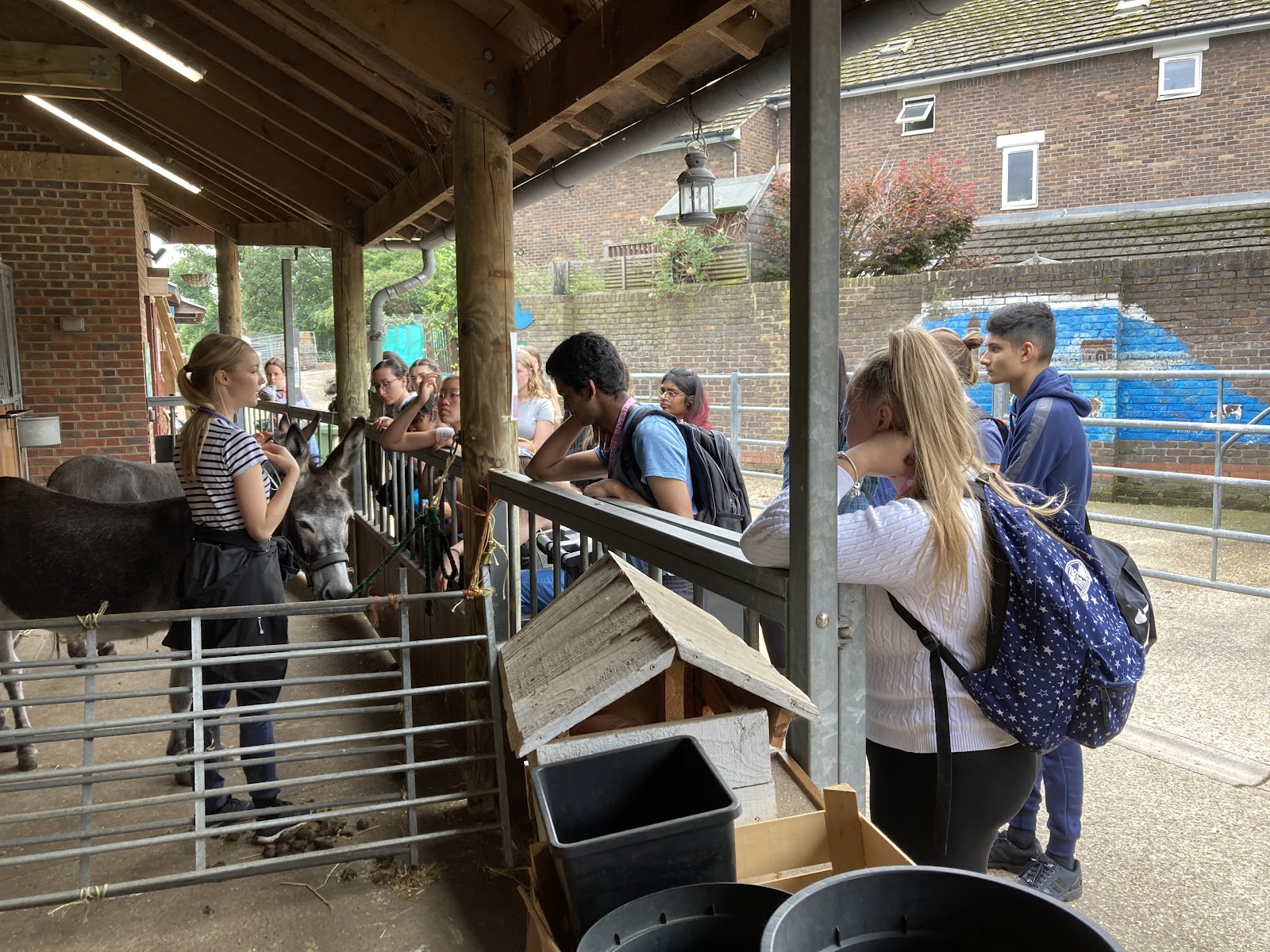 “When I do an exam I like to go head to tail,” says Dr Massie. “It feels methodical that way and then you know you haven’t forgotten anything.”

“The first thing I would look at is the ears - have a little look in, can anyone think what I might be looking for?”

When the demonstration is over, students are given a stethoscope and take it in turns to examine Dora. 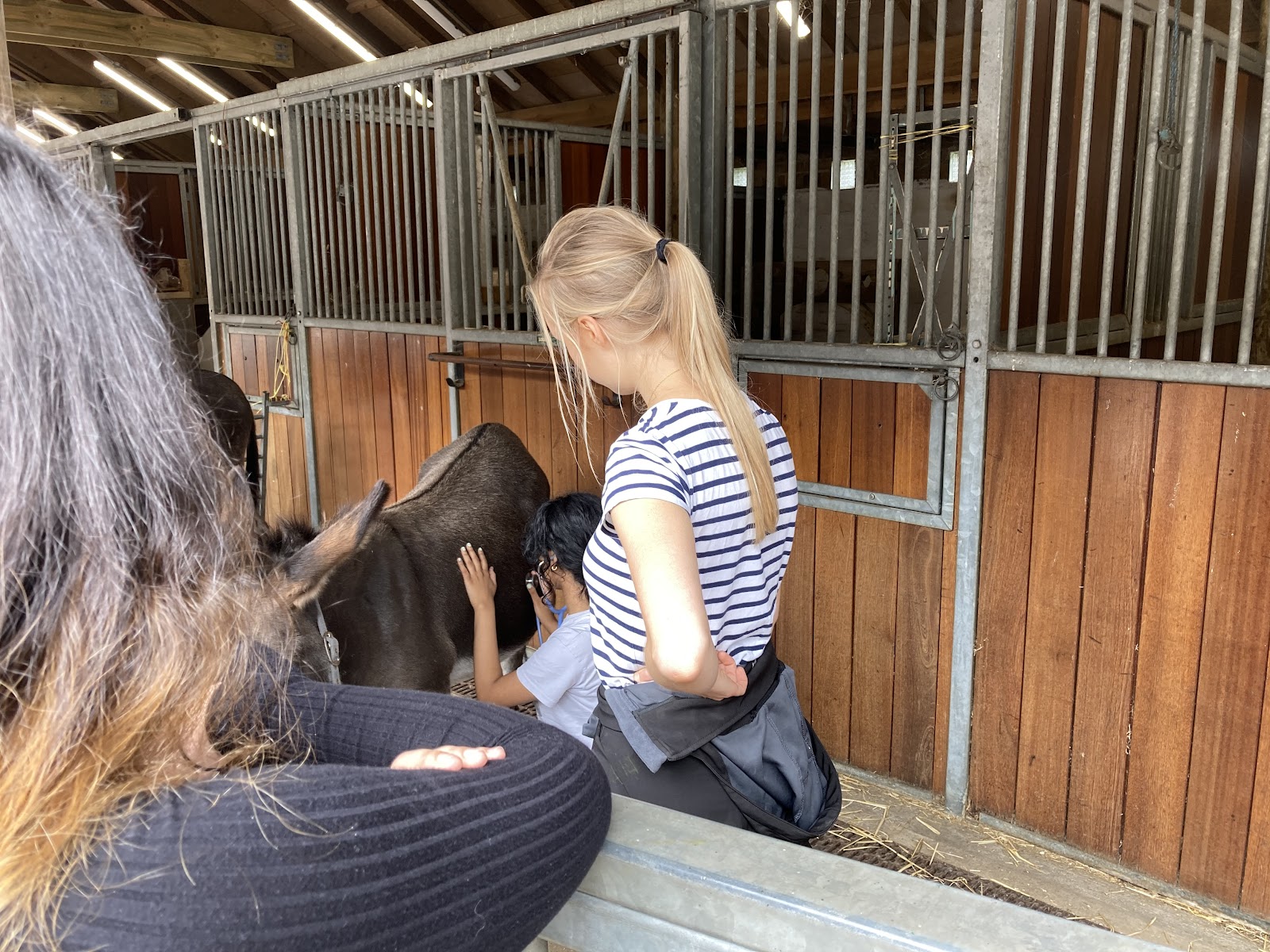 The first student leans down to listen to Dora’s heart; it take a few moments to find, but then -

“There! Wow, her heart rate is so slow! I think it just took a while for it to actually beat!”